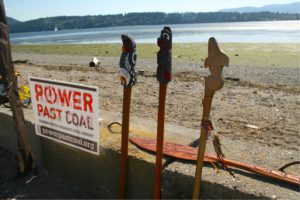 Vision:  We envision ourselves as a diverse and spiritually grounded network working towards improving our understanding of and relationships with First and American Indian communities.

Background:  The action team has its origins in the fossil fuel crises of the Pacific Northwest.  Around 2010, plans were revealed for turning Cherry Point, outside Bellingham, WA into a coal storage and shipping port.  Cherry Point, is not only an aquatic reserve home to several endangered species, but also sacred to Lummi Indian Nation, known to them as  Xwe’chieXen.  It was discovered that in order to preserve and protect these lands and waters from fossil fuel development, it would be necessary to unite the voices the Lummi Nation, the faith community, social justice organizations, environmental groups, government and municipal leaders and concerned individuals. Not only were we able to defeat the coal port, but the same collaborative effort was used to defeat many other proposed new and expansion fossil projects across the Pacific Northwest, notably in the states of Oregon and Washington.  This same collaboration would extend itself out from the Pacific Northwest into Canada and across the United States.  It would also extend itself outside the fossil fuel sphere into other social and environmental spheres.  It even expanded into work of other oppressed communities and issues.

It is the intention of the action team to provide the necessary education, tools, skills and connections to continue the collaborative efforts and to build a strong network for collaboration, alliances and partnerships between Indian and non-Indian communities, working to address our shared responsibilities to restore, preserve, and protect the Earth and our relationship each other and to promote a shared future of respect and well-being for all of us.