You are here: Home / What We Do / Issue Action Teams / First/American Indian Nations (FAIN) / FAIN: Our Work / Missing and Murdered Indigenous Women (MMIW)

“Missing and murdered indigenous women have disappeared not once, but three times,
in life, in the media and in the data.”

Missing and Murdered Indigenous women (MMIW) has been called an “epidemic” and a “crisis.”  It’s a persistent iniquity perpetrated against Indigenous women and girls, not just through the violence itself, but in the failure of our institutions to track it and provide solutions of safety and accountability.

The State of Washington has enacted two pieces of legislation HB2951 in 2018 which increased services in reporting and investigating missing and murdered Native American women and HB1713 in 2019 which is to improve law enforcement response to missing and murdered Native American women.  Oregon also passed MMIW legislation (BH 2625).  While these pieces of legislation address some of the challenges of MMIW, there is a long way yet to go in identifying and addressing the causes and consequences of the violence against Indigenous women.

One response to the MMIW crisis and in support of Missing and Murdered Indigenous Washington (MMIWW), Learning Right Relations is currently sponsoring a MMIW Blanket Project.

Other resources and information are found below the blanket project information, so be sure to scroll all the way down.  Please contact us with any additional information or resources so we can build up a more comprehensive MMIW resources list for the region. 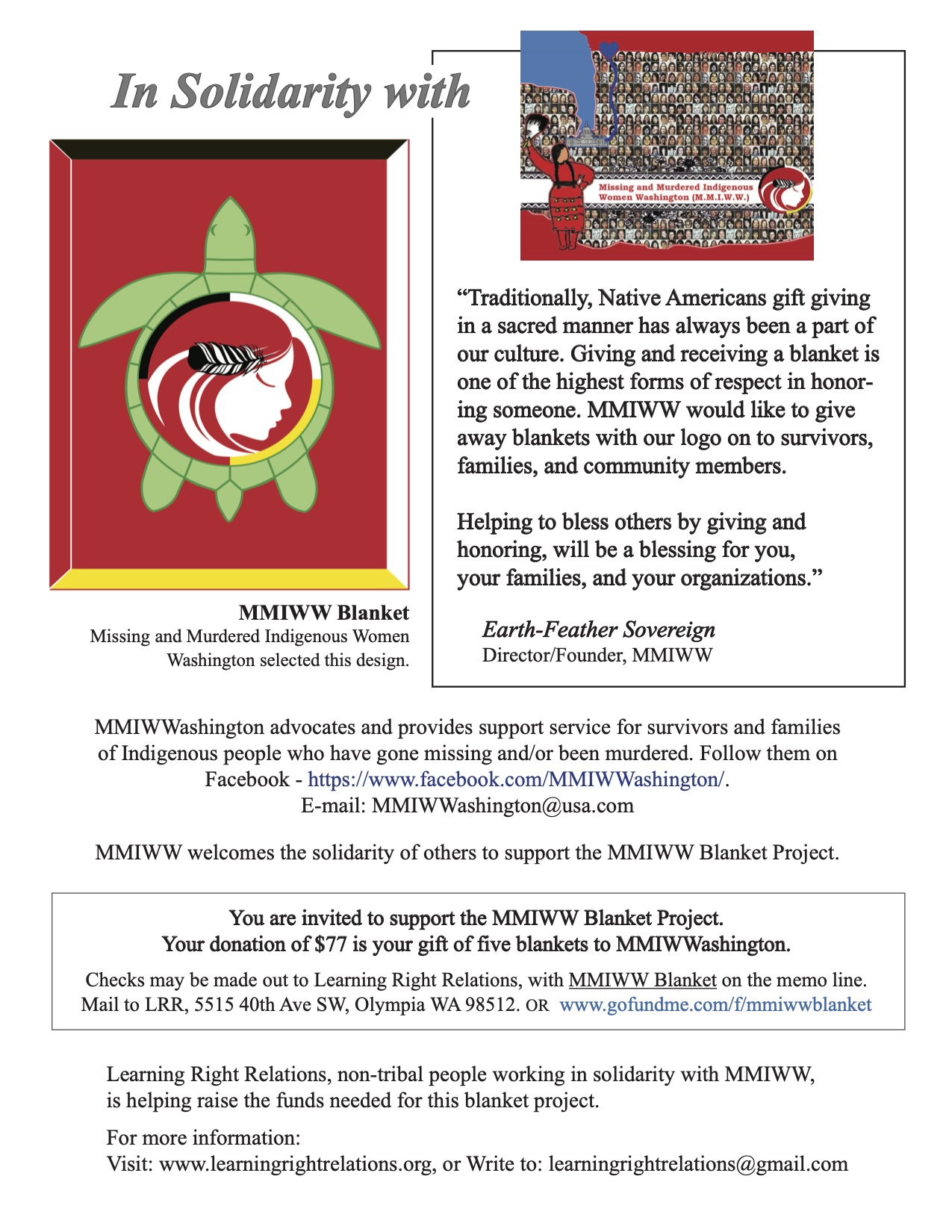 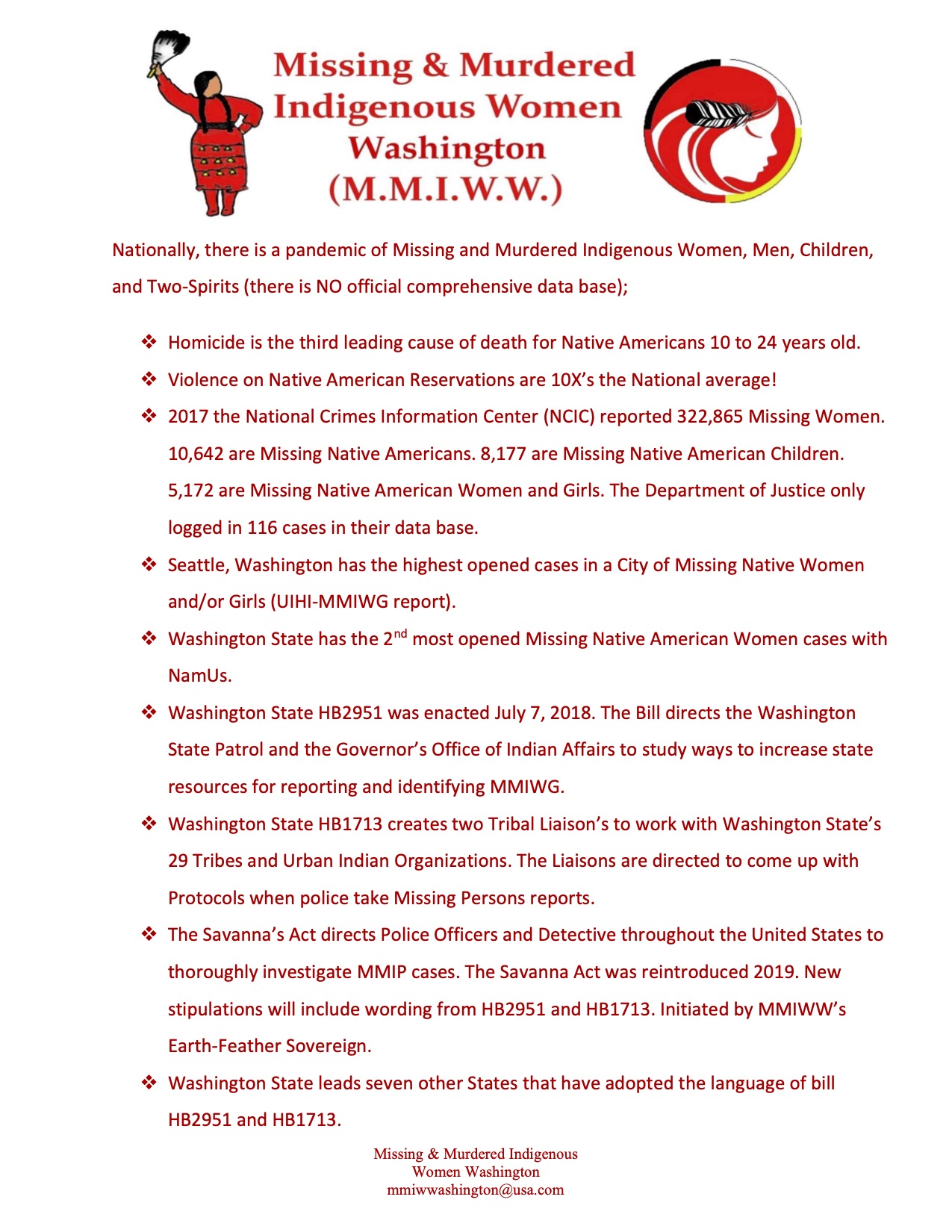 “Missing and Murdered Women & Girls: A snapshot of data from 71 urban cities in the United States” Report, Urban Indian Health Institute, division of the Seattle Indian Health Board

Who are the missing Native women and how do we find them? Emily Washines, Crossut, August 15, 2019

Why Are So Many Indigenous Women in Alaska Coming Up Missing and Murdered? by Jamie Bartosch, Arts & Entertainment, February 26, 2019

The missing and murdered women of Juárez are more than statistics and data points. They are beloved daughters who have left behind an unimaginable and senseless void. They are the fuel of activism against impunity and injustice. They are the seeds of grief that blossom into art. And they are beautiful, fragile memories that must be preserved. Read more here and view the video.  Very poignant.

MMIW: Petition for passing the Not Invisible Act.

Across the United States, over 5,700 indigenous women were reported missing in 2016 alone, with only 116 of those cases logged into the Department of Justice’s (DOJ) missing persons database. This statistic is the tip of the iceberg of the Missing & Murdered Indigenous Women (MMIW) crisis. But while seven states have taken steps to pass legislation to improve reporting mechanisms and data collection, and increase inter-agency collaboration, any such MMIW legislation has not passed on a federal level. Read more here and sign the petition, please.

The truths shared in these National Inquiry hearings tell the story – or, more accurately, thousands of stories – of acts of genocide against First Nations, Inuit and Métis women, girls, and 2SLGBTQQIA people. This violence amounts to a race-based genocide of Indigenous Peoples, including First Nations, Inuit, and Métis, which especially targets women. girls, and 2SLGBTQQIA people. This genocide has been empowered by colonial structures, evidenced notably by the Indian Act, the Sixties Scoop, residential schools, and breaches of human and Inuit, Métis and First Nations rights, leading directly to the current increased rates of violence, death, and suicide in Indigenous populations.
Read full report here.
no comments

Posted on 11. June 2019 by webmaster
The Canadian Unitarian Council acknowledges the systemic and ongoing nature of colonization of Indigenous peoples, land, and resources on this land. We are becoming more aware of the many ways in which colonization unjustly privileges settlers at the expense of Indigenous peoples. We acknowledge the findings and calls to justice of the Missing and Murdered Indigenous Women (MMIW) Final Report, and that these require immediate attention.
Read More here CUC-Response-to-MMIW-FINAL-1
no comments

In the Washington State Legislature, HB 1713 on Missing and Murdered Indigenous Women has passed the House.  Now onto the Senate . . . Read the bill history to date here and follow the bill's progress here.

The House Committee on Public Safety held a hearing on February 12, 2019,  and the House passed on March 5, 2019, HB 1713, improving law enforcement response to missing and murdered Native American women. Staff reported that the State Patrol will conduct studies, working with tribes, and report on June 1, 2019 and propose legislation. Two liaison positions are established, one each for Western and Eastern Washington, and recruits must be involved in tribal communities. A task force is also established including tribal and law enforcement representatives. The task force would draft protocols and guidance on the issue of missing and murdered Native American women. The task force would report to governor by December 1, 2019. You can take action on this bill by clicking on the link above, and click on “Comment on this Bill.”  The comment link will take you to a page that requests your address and email information, a button where you can indicate support, oppose or neutral. You need to make a comment but it can be short – “please support the bill.”

END_OF_DOCUMENT_TOKEN_TO_BE_REPLACED

This congressional session, U.S. Senators are stepping up efforts to address the epidemic of missing and murdered indigenous women through the introduction of legislation designed to enhance record keeping, create law enforcement protocols, and provide crime victim services to native communities. One such measure includes Savanna’s Act, which was introduced by U.S. Sens. Maria Cantwell (D-WA), Catherine Cortez Masto (D-NV), and Lisa Murkowski (R-AK) on Jan. 28. It is designed to address the scant recording of missing and murdered indigenous women and girls. Named after Savanna LaFontaine-Greywind, a member of the Spirit Lake Tribe who went missing during her pregnancy in 2017 and was later found dead in a river, the act seeks to improve tribal access to federal crime databases.  It ultimately failed in the House of Representatives. The re-introduction of the legislation followed the Washington state Senate House Bill 2951, which became law last June and is also designed to bolster data collection of missing and murdered indigenous women. Read more here.

Why Are So Many Native American Women Abused, Missing and Murdered?

Take action! Go to the website below read the bill and comment on this legislation. "At the state level, Republican Rep. Gina McCabe introduced a House bill in Washington State that would bring the federal, state, and federally recognized sovereign tribal governments together to ensure that everyone in the state who goes missing is reported and listed in a central location. The bill, now making its way through the legislative process, mandates that the State Patrol creates a list of missing Native American women in Washington by June this year, working together with tribal and non-tribal police agencies."

Sunday, January 20, 2019 at 10 AM – 2 PM Occidental Square, 117 S Washington St, Seattle, Washington 98104 Heading into our 3rd year of the Women's March, We hear you! We hear our local communities and we believe that no one stands alone. It will take all of us to create real change. 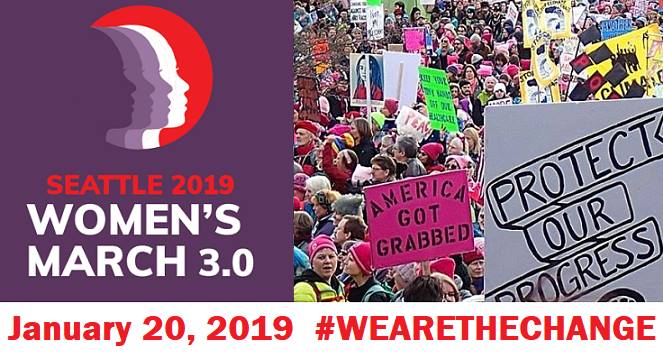 We ask you to participate on Sunday and continue taking part in your communities all year around. Human trafficking happens in your own backyard, Missing and Murdered Indigenous Women of Washington should not happen, Rape kits sitting on shelf for years should not be acceptable. Children sleeping outside as they are without a home should not be the norm, Environmental Justice isn't just two words. We are highlighting what we CAN change not just yell and get our frustrations out for a day. Read here for more info.

END_OF_DOCUMENT_TOKEN_TO_BE_REPLACED

Posted on 17. September 2018 by webmaster
. . .
Washington State Initiative 940, the Police De-Escalation Bill, will require law enforcement to receive training in de-escalation, in mental illness, and in providing first aid at the scene of police incidents. It also requires independent investigations of police shootings, mandates the inclusion of tribal governments when tribal citizens are shot, and, perhaps most importantly, makes it easier to prosecute police officers who misuse deadly force.
Click here to read more.

Posted on 17. September 2018 by webmaster
Members of Congress met with tribal leaders during a two-day Tribal Unity Impact Days event hosted by the National Congress of American Indians this week.
Tribal leaders traveled to Washington, D.C., carrying a list of concerns they wanted to speak with congressional members and staff about, such as water development, sacred sites, cultural resources, economic development, the opioid epidemic, funding, agriculture, domestic violence, reorganization of the Department of Interior, and self-governance.
. . . Over the four and half hours, congressional members stood at the podium providing their statements and answering questions. The three issues that came up often: The Farm Bill, the Violence Against Women Act and the court nomination of Brett Kavanaugh. Click here to read more.