You are here: Home / What We Do / Issue Action Teams / First/American Indian Nations (FAIN) / FAIN: Our Work / Lummi Nation 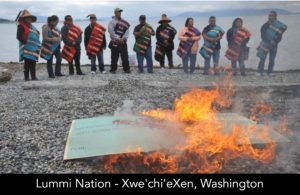 Lummi Nation, Lhaq’temish, is one of the numerous tribes of the Coast Salish Peoples. They are a federally recognized Nation by the 1855 Treaty of Point Elliott and have a reservation in north Bellingham, Washington.

In 2005, through the efforts of Beth Brownfield, the Bellingham Unitarian Fellowship began building a relationship with Lummi Nation. Lummi members have spoken at adult sunday forums, been part of our food bank program, conducted services and participated in a number of social and environmental events.

Some of the larger projects that UUs particularly the Bellingham Unitarian Fellowship and Lummi have worked on together include:

Opposition to the Gateway Pacific Terminal

In 2013, Lummi Nation requested the Bellingham Unitarian Fellowship’s (BUF) assistance in bringing the Lummi message of opposition to the proposed Gateway Pacific terminal to area social justice, environmental and faith communities.  Background information on this effort is contained in the First Nations’ Struggles and the Faith Community Response.

In 2015, Lummi Nation was the focal point of the Public Witness event at GA in Portland, Oregon. The video of the event and a program description can be found at Public Witness, General Assembly. This event also included presentations by Chinook Vice Chairman Sam Robinson, Kate Elliott, and other Citizens of the Chinook Indian Nation of Oregon and Washington. Also, Lummi Nation’s struggle against the Gateway Pacific Terminal was incorporated into the 2015 Action of Immediate Witness: Support a Strong, Compassionate Global Climate Agreement in 2015: Act For a Livable Climate.  Summer 2015 UU World Magazine featured an article written by Elaine McArdle “Faith groups join Lummi Nation fight against coal.”

On January 5, 2015, Lummi Nation formally requested the U.S. Army Corps of Engineers (USACE) deny Pacific International Terminals (PIT) and SSA Marine the required permit from their agency. On May 9, 2016, the USACE issued a  Memorandum for Record, stating that the proposed Gateway Pacific Terminal would “violate the Lummi’s U&A treaty fishing rights.”  The rejection of this permit then halts the entire project.  As a result, the Washington State Department of Natural Resources has denied their required permit.  PIT/SSA have pulled the project.

May 2017:  “Whatcom County Council at last—after more than a year of work—approved a series of amendments to govern future planning policy for the Cherry Point industrial zone.

The amendments include provisions relating to future fossil fuel export projects; but more comprehensively, they re-weight and give improved standing to considerations of ecological function, environmental protection, historical use, stewardship and recognition of indigenous treaty rights alongside imperatives of economic development and industrial use in future planning for Cherry Point. Notably, the amendments require all permits that involve handling fossil fuels to be reviewed under the “Magnuson Amendment” to the federal Marine Mammal Protection Act; and very likely they foreclose forever on any future consideration of an additional shipping pier in Cherry Point Aquatic Reserve.”   The Cherry on Cherry Point, The Grist, May 24, 2017

In the meantime, work is being done to further secure Xwe’chi’eXen (Cherry Point) from not only any further threat of new development, but also any expansion of the existing fossil fuel industries located there.  The Whatcom County Council has continually issued a moratorium on any further fossil fuel development at Xwe’chi’eXen until a more thorough review of the site is conducted and to evaluate proposed amendments to the Cherry Point UGA of the Whatcom County Comprehensive Plan.

For many years, Lummi House of Tears Carvers has been creating healing Totem Poles that journey to communities across the nation.  Each Totem Pole is carved with a message and a prayer for a special circumstance within a given community.  The Totem Pole is then taking on a journey, making stops along the way for others to imbue it with their prayers, blessings and hopes.  Each blessing stop brings together social justice organizations, environmental groups, diverse faith communities, public servants and concerned individuals in a time of deep reflection.  Since 2013, the Totem Poles have focused on those communities being impacted by the fossil fuel industry and it’s negative impact on our air, water, land and our human and natural communities.  UU individuals and congregations across the nation have been invited to and participated in blessing stops that journey into their communities in the U.S. and Canada. 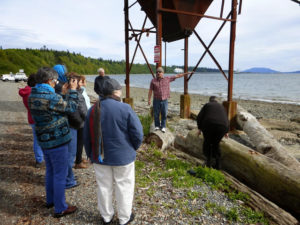 The UU College of Social Justice did two programs with Lummi Nation, one in 2015 and again in 2016.  This program brought together UUs and others to spend a week in dialogue with the sovereign people of the Lummi Nation in Washington State.

During that time participants heard from Lummi leaders, elders, activists and staff and discussed Lummi history, culture and the broken promises that characterize U.S. policy towards First/American Indian Nations.  They explored the Christian Doctrine of Discovery and its impact on indigenous Nations.  They discussed the impacts of Federal Indian policies, acts, and practices on the Lummi people and the history of U.S. and American Indian Nations relations in general.  They heard about injustices confronting native people within North America and were exposed to the heart-deep trauma native people carry with them and the resiliency in which native cultures have survived.  They learned about the Lummi Nation’s leadership in the struggle to protect land, air and water from the ravages of the extraction industry and the ways other Nations and Tribes are organizing, particularly for climate justice.  Particular emphasis was placed how individuals and UU communities can be in right relation with First/American Indian Nations.