You are here: Home / What We Do / Issue Action Teams / First/American Indian Nations (FAIN) 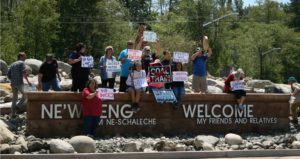 From operating boarding schools to Standing Rock in 2016, Unitarians, for good and for bad, have had roles to play in a long history of dealings with various indigenous groups throughout the United States and in a number of issues faced by those communities.

Some of Unitarians’ first contacts with native communities included attempts to “educate” Indians, beginning back in 1855.  These attempts followed the same pathway as other early Christian-based groups whose focus was assimilating the native populations without regard to the traumatic consequences inflicted on these peoples.

As of 1902, UU historian Rev. George Willis Cooke’s writings stated there were 3 attempts on the part of Unitarians to undertake “educational work amongst the Indians.” One mission was among the Chippewa/Ojbiwa in Minnesota in 1855 that failed due to the lack of funding.  In 1871, President Grant assigned to the Unitarians the responsibility of education the Utes on the reservation near White River, Colorado that was attempted in 1885.  This attempt failed as well due to “not getting sufficient encouragement.”  In 1886, the American Unitarian Association established a boarding school on the Crow reservation in Montana called the “Montana Industrial School for Indians” or “Bond’s Mission School” run by Unitarian Rev. and Mrs. Henry F. Bond.

These early relationships are not ones to make Unitarians proud. However, Unitarians have changed their thinking and have begun walking down a different pathway in its relationships with indigenous communities. Any number of general and business resolutions, actions for immediate witness, responsive resolutions, and a statement of conscience have all been put forward and adopted by the Unitarian Universalist body at-large since at least 1967. Some of these actions can be found at the UUA website.

While these actions have occurred on a national level within Unitarian Universalism, this website will:

To engage in this work, we must be willing to look and consider several things.

Reference:  Unitarianism in America: a history of its origin and development, pg 340-341
By George Willis Cooke, American Unitarian Association, Boston, 1902