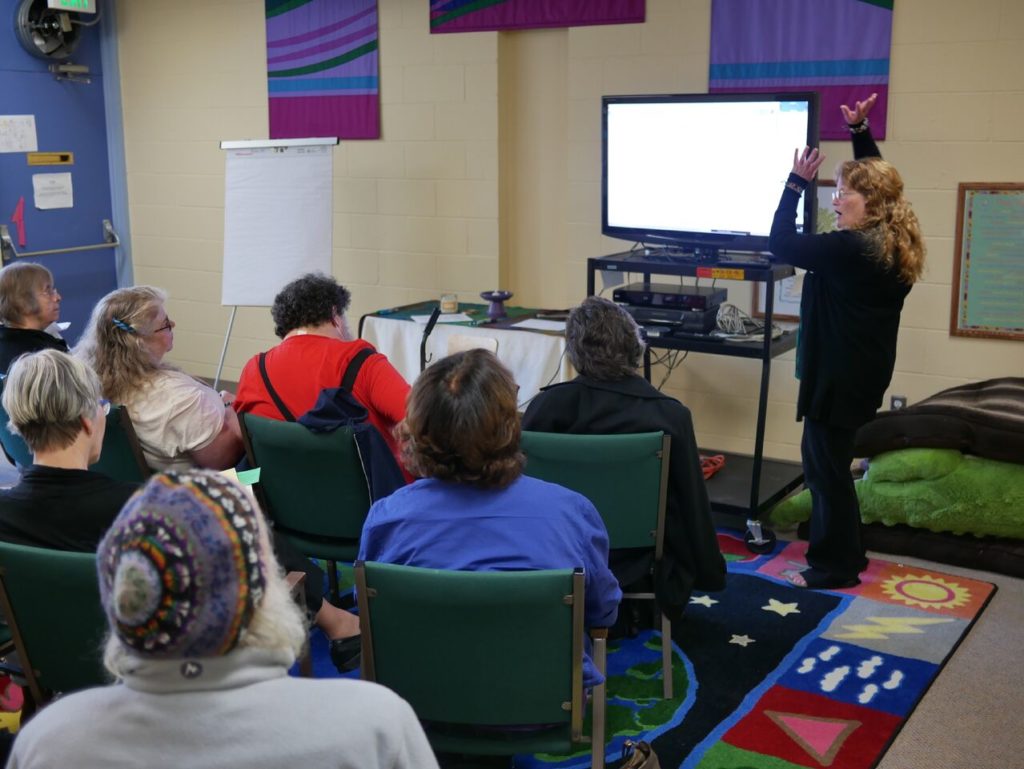 Most of the participants at this session were new to working with issues in Indian Country so some time was spent in “orienting” them.  We reviewed the Guidelines for JUUstice Washington Gatherings(full text at: https://juustwa.org/resources/guidelines-for-juustice-washington-gatherings/).

After reviewing the guidelines we had several presenters that spoke about specific issues in Indian Country that they were involved in.

Larry Hildes, a Bellingham lawyer, has been brought onto Peltier’s legal team. Larry and Karen Weill made a presentation on Indian American Indian Movement activist Leonard Peltier who is serving life in prison for the shooting of 2 FBI agents in 1975 on Pine Ridge Indian Reservation.

Leda Zacharison of Earth Ministry spoke to the importance of this initiative coming up on the ballot this November election cycle.  Among many other things, the initiative speaks to how it will assist the Tribes and Nation in addressing the impacts of climate change.  President Fawn Sharp of Quinault had a hand in writing a good chunk of that legislation and being promoted by the First Americans Project (https://www.facebook.com/TribalResistance) among other environmental, business, labor, faith and social justice groups.

Six months of discussions with 29 different tribes brought forth what Matthew Randazzo, the policy consultant for the Quinault, calls “the most rigorous and extensive tribal consultation anyone I’ve been working with has ever encountered.” And as a result, I-1631 addresses myriad tribal issues, from generating aid to assist with the coastal relocation of the Quinault to mitigating the wildfire threats faced by tribes in eastern Washington.  (https://grist.org/article/dont-call-it-a-tax-inside-washingtons-attempt-to-pass-a-fee-on-pollution/).  There was a handout on1631 Benefits to the Tribes flyer.

Orcas of the Salish Sea movement

Deb Cruz spoke about both about the Southern Resident Orcas survival crisis and the return of Tokitae (Lolita) from Miami Seaquarium (https://sacredsea.org).

Kurt Russo on The People Under The Sea/91
http://forthewild.world/listen/kurt-russo-on-the-people-under-the-sea91

Trump has just issued orders to reduce the regulations on the Columbia and Snake River Dams, the one we need to remove to save our Orcas and Salmon. 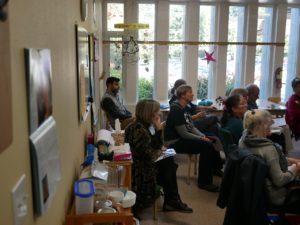 Beth Brownfield of the Bellingham Unitarian Fellowship spoke about the upcoming 2019 Canoe Journey at Lummi Nation.  The initial 2019 Canoe Journey will have canoes converging on Alcatraz Island off the coast from San Francisco, California in commemoration of the 50thanniversary of the takeover of the island (https://www.canoejourney2019.com).  As part of that Journey, Lummi Nation has stepped forward to sponsor the main landing along the PNW coast https://www.facebook.com/paddletolummi2019/).  This was not a planned event so there was no allocation in the Tribal budget to cover the expenses.  We are initiating a fundraiser for 300,000 to assist Lummi Nation in hosting this landing. For more information contact Beth Brownfield at bethbrownf@aol.com.

Deb Cruz oriented participants to the national UU movement that is forming to support those protectors who are being tried, sentenced and imprisoned as a result of their actions during the Standing Rock crisis in 2016.  The movement is based off the WE ARE ALL RELATED: SOLIDARITY NOW WITH INDIGENOUS WATER PROTECTORS:  2018 Action of Immediate Witness https://www.uua.org/action/statements/we-are-all-related-solidarity-now-indigenous-water-protectors.  A network (https://www.createclimatejustice.net/portal/#/groups/91/main) is being created and invitations to join the network will be going out soon.

Deb Cruz introduced the current crisis taking place with the Indian Child Welfare Act.  Property rights groups have succeeded in the march to gut this law, which means we will see an increasing number of Indian children being taken away from their families and put into the State foster care systems.  The law was intended to require States to place Indian children entering into the foster care system with Tribal and Indian families first, before resorting to non-Indian foster care.  Weakening this law signals a return to pre-ICWA times and ties very much into a similar occurrence of trauma experienced with the removal of Indian children and being placed into boarding and residential schools. 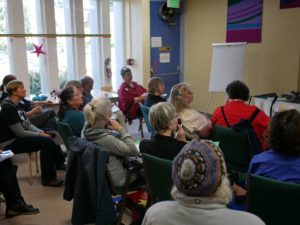 A movement is just beginning to establish a Commission to work towards recognizing Indigenous experience and history, restoration and revitalization of culture, protection of the land, water and air, food sovereignty and more.  Also includes the healing of historical trauma of the boarding/residential schools and will be impacted too by recent ICWA developments.

Proclamation of Support for Truth and Reconciliation in Washington State handout.

Working on a project to identify sacred sites in the Port Townsend area at the same time as the Justice Summit.  The Chetzemoka Interpretive Trail is also a truth and reconciliation project that identifies 15 locations of tribal, geographic and historical significance throughout Port Townsend. The trail highlights the 19th-century S’Klallam Tribe chief, Chetzemoka, the last Klallam chief.  More information on Quimper’s Native Connections Action Group and this project and others can be found at https://www.quuf.org/about-quuf/committees/native-peoples/.

The Learning Right Relations team has been very active and is promoting a speaker series around issues in Indian Country with events coming up on November 11thand December 2nd.  While November’s speakers are to yet be announced, December’s speakers will be Zoltan and Debi Grossman.  Zoltan is faculty member that teaches Native American studies at Evergreen State College and is a published author, his most recent book entitled “UnlikelyAlliances.”

More info about Zoltan at https://www.youtube.com/watch?v=J39PvxcvP_I.  For more info about Olympia’s Learning Right Relations events and activities check their website at http://oly-wa.us/learningrightrelations/index.php

UUJME (UUJME.org) is interested in working with other UU human rights groups that are concerned with marginalized or oppressed people. One approach that we are thinking of is to develop a Business Resolution that calls on the UUA to refuse to invest its money and the money of many congregations in corporations that are making money from human rights violations. For example, you and others were successful in getting the UUA’s governing body, delegates to the General Assembly, to reject the Doctrine of Discovery and support the UN Covenant on the Rights of Indigenous People. But it would be good to make that an action item and not just a statement of conviction by refusing to own shares in corporations that are responsible for various forms of oppression of indigenous people such as the banks which fund pipelines that that endanger the water and environment of Native people. I would imagine that the rights of indigenous people, of people of color, of Palestinians and of immigrants would be reflected in such a resolution.

So I am wondering what groups or individuals among UUs might be interested in working on such a resolution.

Here is a list of the corporations that the UU Common Endowment Fund (UUCEF) now invests in –  http://uucef.org/files/2017/07/Holdings.pdf

You will note that the UUCEF has major holdings in many banks that have been the target of indigenous groups for their funding of pipelines and of anti incarceration and immigrant rights groups for their funding of private prisons and ICE centers. These banks include Wells Fargo, Bank of America, Goldman Sachs, Citigroup, Morgan Stanley and others.