You are here: Home / What We Do / Issue Action Teams / First/American Indian Nations (FAIN) / FAIN: Our Work / Challenges to the Salish Sea / Major Issues of Xw’mulley / Roberts Bank  Terminal 2 Project 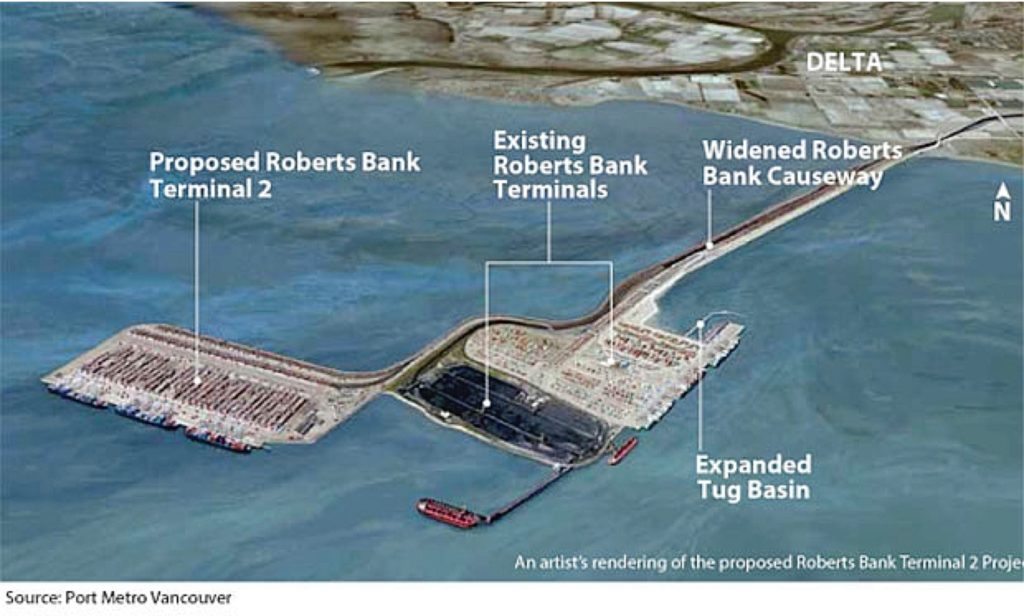 British Columbia Environmental Assessment the structure for the process has been established but there have been no hearings or commenting sessions scheduled as yet.

Lummi ltr re UNDRIP to CA House of Commons

Washington state has made significant commitments to and investments in the protection and recovery of these killer whales, their critical Salish Sea habitat, and their food web, which hinges on the availability of Chinook salmon. The terminal will threaten the progress made to date on recommendations of the Governor’s Orca Task Force and on state legislation that has ensued from its deliberations. Even ignoring the added risks of oil spills and ship strikes, there would still be a major increase in underwater noise levels from these massive container ships that will further limit the orcas’ ability to echolocate, communicate and hunt. Over 40 organizations and nearly 100,000* individuals have asked Governor Inslee to oppose the Roberts Bank terminal project, signing a petition addressed to him. And they have asked that if the project is approved in spite of their strong objections, he should insist that robust risk-mitigation measures — such as an emergency tug strategically located along the vessels’ path — be required to protect the orcas, salmon and Washington state environment. Read more here.

As currently planned, Roberts Bank Terminal 2 (RBT2) would be built in the sub-tidal waters of the Fraser River delta adjacent to the Westshore coal terminal, on 437 acres of critical habitat for salmon and migratory birds. Once in existence, it would significantly increase the Port’s capacity for larger container ships and also induce more container-ship traffic through the trans-boundary waters of the Salish Sea — by up to 520 transits per year. The massive “Mega-Max” container ships that could call on this terminal typically carry 18 to 24 thousand containers. They can also carry much larger amounts of propulsion fuels, in some cases over 4 million gallons worth, which could dramatically increase the extent of an oil spill from a container-ship collision or grounding. Read more here.

The Vancouver Fraser Port Authority is continuing field studies in December 2019 as part of ongoing environmental and technical work for the Roberts Bank Terminal 2 Project. According to the Port, the purpose of these studies is to determine the physical conditions (e.g., temperature and salinity) influencing biofilm presence and distribution at Roberts Bank. The Roberts Bank study area is located in the upper and mid intertidal zones north of the Roberts Bank causeway. Read more here.