It is our sacred obligation to protect our Salish Sea homelands and our community,
including the salmon and qwe ‘lhol mechen (orcas).

“We will rise again”

Lummi Nation is calling for communities of the Salish Sea to stand together in protecting qwe ‘lhol mechen (resident orcas) from extinction. On Saturday, June 15, at the Paccar Pavilion in Olympic Sculpture Park, Tribal leaders, scientists, and activists spoke at an event concluding the 7,700 mile  “We will rise again” totem pole journey. The 16’ foot long orca totem and the journey are part of the Lummi Nation’s Salish Sea Campaign, the aim of which is to protect and revitalize the Salish Sea.

“This is a vision of resilience, truth, belonging, and healing for qwe ‘lhol mechen,” said Lummi Nation Chairman Jay Julius. “This is a battle for the soul of Xwullemy, the Salish Sea.”

“Everything interrelates. The orca’s an alarm bell” said Leonard Forsman, Chairman of Suquamish Tribe and President of the Affiliated Tribes of Northwest Indians. “Salmon habitat, shellfish habitat, water quality and all these things impact the food web.”

The Salish Sea Campaign includes a call for a cumulative impact study on human-caused stressors to the Salish Sea, and a moratorium on any new such stressors until a baseline of health has been restored. To date, projects called out in this moratorium include proposed Navy underwater weapons testing, the Trans-Mountain Pipeline, and Roberts Bank Terminal 2. Salish Sea vitality is to be measured by salmon population and robustness; 1985 levels will be used as an initial baseline, as these levels were adequate to feed both qwe ‘lhol mechen and people.

The Campaign also involves ceremonial feedings of the qwe lhol mechen and the development of a multi-phased pilot project to save the Southern Residents  “They are our relatives.  When somebody in our community is hungry, we feed them,” said Raynell Morris, Lummi elder and moderator of the event.

The event showcased the Lummi Nation’s plan to bring Lolita/Tokitae from Miami Seaquarium back to the Salish Sea. “Down in Miami, we held ceremony outside the Seaquarium and gave our relative her real name. Sk’aliCh’elh-tenaut,” said Councilman Fredrick Lane, who traveled with the totem pole. “It is our Xa xalh Xechnging (sacred obligation) to bring her home.” 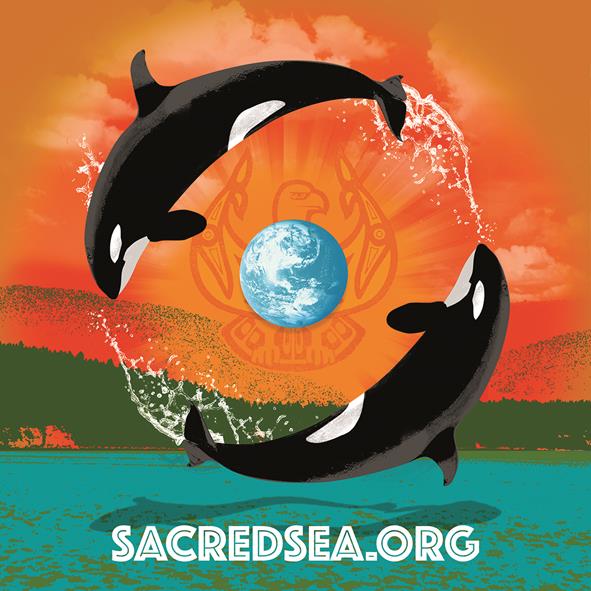 Tribal leaders from Suquamish and Nez Perce joined those from Lummi.  Representatives from the Sierra Club, Wild Orca, the Whale Sanctuary Project, the Orca Network, and Friends of the San Juans also spoke at the event about the totem pole journey, SRKW, and the Salish Sea.

for more information on the Salish Sea Campaign, go to www.sacredsea.org