You are here: Home / What We Do / Issue Action Teams / First/American Indian Nations (FAIN) / FAIN: Our Work / Challenges to the Salish Sea / U.S. Navy Northwest Training and Testing Study Area 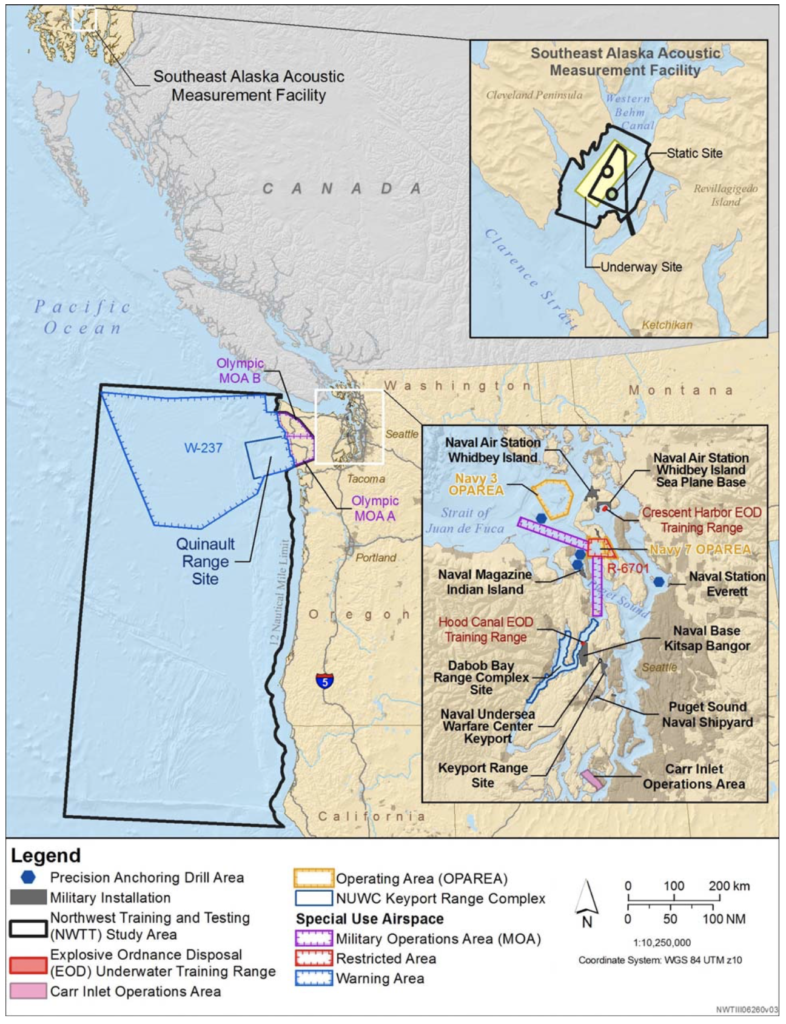 “The Navy’s Proposed Action is to conduct training and testing activities at sea and in associated airspace within the Study Area beyond 2020. These activities continue to include the use of active sound navigation and ranging, known as sonar, and explosives while employing marine species mitigation measures. Proposed activities are similar to those conducted in the Study Area for decades and analyzed in the 2015 document.

The purpose of the Proposed Action is to conduct training and testing activities to ensure the Navy can accomplish its mission under Congressional direction in section 8062 of Title 10 of the U.S. Code to maintain, train, and equip combat-ready naval forces capable of winning wars, deterring aggression, and maintaining freedom of the seas.

To achieve and maintain military readiness, the Navy proposes to:

The ongoing battle against the US Navy’s presence in the Pacific Northwest (Olpmpic Pennisula) and in particular with its electronic and electromagnetic warfare has been going on since at least 2015.  The proposed training area includes the Quinault, Hoh, and Quileute reservations.  The proposed area will also border the Jamestown S’Klallam, Lower Elwah Klallam, Makah, Swinomish and Ozete reservations.

On August 19, 2019, NOAA published in the Federal Register an application for a Letter of Authorization “to take marine mammals incidental to training and testing activities conducted in the Northwest Training and Testing (NWTT) Study Area for a period of seven years, from November, 2020 through November, 2027.”

Navy plans extensive training in Pacific Northwest. Here’s how many animals could be hurt.-Seattle Times