You are here: Home / What We Do / 2018 NW Justice Summit and Legislative Conference Archives / 2018 Annual Justice Summit: Retrospective

The 2018 Justice Summit – Evolving for Justice 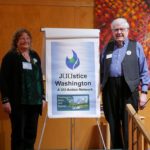 with a new UU state action network for Washington State, JUUstice Washington, now firmly in place.  The day brought a lot of excitement for the new organization, its mission and its vision.  It also brought a lot of appreciation for the length and the ruggedness of the road ahead — A road that would take us from good intentions to becoming the effective instrument to advance social and environmental justice and UU engagement that we all hoped JUUstice Washington would become.   More than 110 folks actively participated in the summit this year.  It was the first justice summit for JUUstice Washington and the 8th and final summit for the Northwest UU Justice Network. 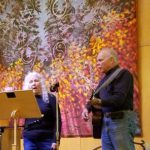 The prelude to the summit was an inspirational sing-along of popular labor, civil rights, and liberation music led by Bruce Baker on Friday evening, assisted by Barbara Powers.

All through Friday afternoon’s set-up for the sing-along and for the summit to follow, the host team members from Edmonds UU Congregation (EUUC) and members of the boards of NW UU Justice Network and Washington UU Voices were the beneficiaries of the wonderful smells of food preparation for the summit meals coming from the EUUC kitchen.

Saturday, October 20th found board, staff, and host team members trying to enter the EUUC parking lot well before 7 AM without waking the folks at EUUC’s car camp. By 7:30 AM, all the exhibits were in place for the Justice Fair, promising an opportunity for summit participants to visit with allied organizations, experience a workshop about the EUUC car camp for women and children, learn about the Black Lives Matter flash stance project rapidly expanding beyond East Shore Unitarian, 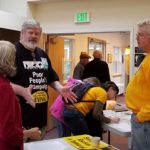 and other congregational justice “programs that work.” While breakfast was being enjoyed, summit participants questioned exhibitors and signed up for various levels of participation with allied justice organizations and independent justice allies. 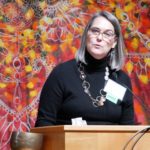 Following announcements, the first plenary session included the dynamic charge to the assembly provided by Rev. Eric Kaminetzky (link coming) and a dynamite sermon by Rev. Cecilia Kingman (link coming). They each rocked the house and ignited a commitment to individual and collective justice work that carried all through the day and beyond.

Starting at 10 that morning, 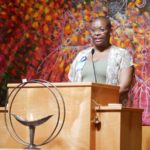 Exquisite Erika, a member of the board, led the ceremony to launch JUUstice Washington. Exquisite first memorialized Dick Jacke, founding member of both parent organizations; joined Deb Cruz, president of the Northwest Unitarian Universalist Network (the Network) in honoring DD Hilke’s 8 years or serving as the volunteer executive director of the Network; and provided highlights from the many discussions and meetings that led to merging Washington UU Voices for Justice with Northwest UU Justice Network. 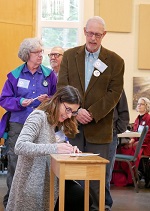 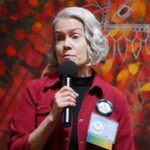 One of the cornerstones in the ongoing evolution of JUUstice Washington is the commitment of leadership to learning about and pursuing equity, diversity, and inclusion (EDI) in every aspect of our programming and administration. For this session, our program manager, Cynthia Good, teamed up with 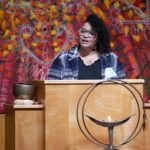 Kyana Wheeler, Deputy Manager of the City of Seattle’s Race and Social Justice Initiative, to provide an introductory set of tools and resources to help all participants and leaders in the new network begin to identify and address systems of privilege and oppression in ourselves and in our justice work.  Their presentation was followed with several effective exchanges with the audience members.  Many attendees agreed that this session was a highlight of the summit.

Lunch at the Justice Summit is always a great opportunity to network with activist colleagues. 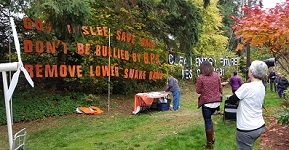 This year, we had the added bonus of a visit from Backbone Campaign’s interactive truck.  We learned much about getting our message out prominently to the public and the media. 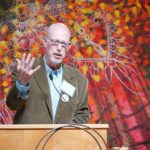 After lunch, attendees returned to the sanctuary for a plenary session on effective legislative advocacy tools, techniques, and approaches that was presented by JUUstice Washington board members Kelly Thompson and Bill McPherson.

A 7th session was offered for those seeking to start other issue Action Teams.  That session began to pursue several issues, but ultimately centered around “nurturing practical spirituality” for JUUstice Washington participants and allies.

At the final session of the day, retiring executive DD Hilke solicited reactions to the day and asked summit participants to write and then post brief statements regarding:

Take a moment to read their statements.  You’ll likely find some of your own justice commitments and journeys within their words.

Barb Powers and Bruce Baker closed out the day by leading the attendees in singing “We are a gentle, angry people.”

Special thanks to all of the host team volunteers from EUUC, the JUUstice Washington board, staff and volunteers, presenters, and the many participants who shared, questioned, strategized, and stepped forward to power our UU and allied justice efforts in the coming year.  Thanks also, to the many folks who spontaneously pitched in to clear up and straighten up the EUUC facilities at the end of a long, productive day.

Thanks to our Summit Sponsors!