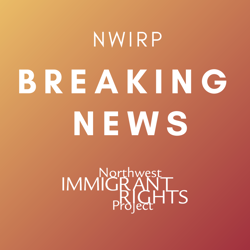 NW Immigrant Rights Project would like to share an update on yet another effort on our part to hold U.S. Customs and Border Protection (CBP) accountable for their unlawful actions. You may remember a situation during the first weekend of this year in which CBP officials at the Blaine port of entry were detaining people born in Iran for extended questioning.  At the time, CBP denied that there had been anything out of the ordinary or that people had been detained for extended periods. They also denied that there had been a directive to treat people from Iran differently.

Earlier this year, we filed a FOIA request on behalf of our partners at the Council on American-Islamic Relations – Washington Chapter (CAIR-WA).  Not surprisingly, CBP failed to respond within the required timeframe, so we filed a federal lawsuit in order to get them to release the information.  CBP then refused to properly search for this information and withheld several documents. However, our staff was undeterred. We filed a motion asking a federal judge to order them to release the documents, a request the judge granted.

This week, our litigation team finally received the initial production of documents, which confirm that there was a CBP directive to detain community members, that people were detained for extended periods of time, and that CBP then misled the public about it.

We are still awaiting the potential release of additional documentation on this issue but we are sharing with the community the information already available, which you can review here. We are grateful that the hard work of our impact litigation team has helped to set the record straight about these abuses by CBP.

We look forward to keeping you up-to-date as this case continues. Thank you for your continued support of NWIRP and for making this important work possible. We are glad to count you as partners in our shared pursuit of justice.

This weekend is Part II of our annual Justice Summit.  This is the time where we take what we learned from the October panels and create action plans to address the many issues that were raised.  Many of the panelists will be returning and we’ll also have some new faces!  There’s lots of work to do to transform ourselves, our congregations, our communities and our world.  Join us and lets walk together and create the change we all know needs to come.