You are here: Home / Event Postings / “The Condor and the Eagle” film screening and fundraiser for Tokitae Fund of Lummi Nation’s Lhaqtemish Foundation
Join the Unitarian Universalist Ministry for Earth, the Bellingham Unitarian Fellowship and many other friends and allies as we come together virtually as people of faith and conscience to celebrate the Fall Equinox, watch this award-winning documentary, hear from the filmmakers & protagonists, and unite the faith community and allies in the movement for Indigenous rights and climate justice.
Even if you’ve already seen the film, join us again as we listen to the voices of Lummi Nation and Ponca Nations.
This day before the 50th Anniversary of Sk’aliCh’elh-tenaut’s arrival at Miami Seaquarium.  Doug and Jewell James will speak to the heart in a significant way about bringing  Sk’aliCh’elh-tenaut (Tokitae) home.  This is not just about returning a whale to the wild.  It’s about recognizing and honoring Lummi “Schlangen” (life ways).  It’s about Truth and Reconciliation.  It’s about restoring and protecting the Salish Sea and all the lives that depend on Her.
And then, it’s about our future on this planet.
September 22nd • 6:30 pm
Register now:  https://event.webinarjam.com/register/114/qyg2yuro
“Four Indigenous leaders embark on an extraordinary trans-continental adventure from the Canadian Boreal forests to deep into the heart of the Amazonian jungle to unite the peoples of North and South America and deepen the meaning of “Climate Justice”. The Condor & The Eagle documentary offers a glimpse into a developing spiritual renaissance as the film four protagonists learn from each other’s long legacy of resistance to colonialism and its extractive economy.” 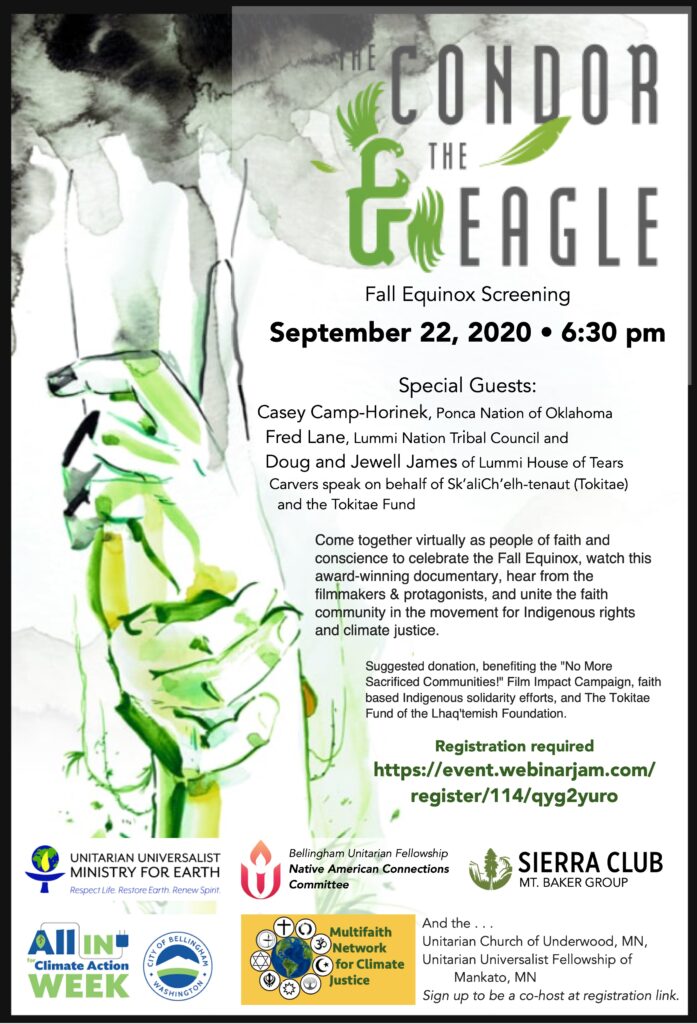