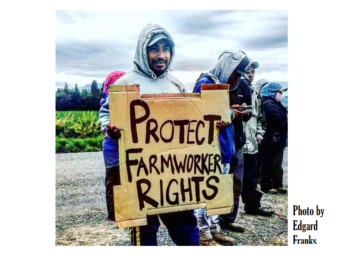 On November 12, after months of closed-door negotiations involving corporate agricultural interests and the UFW, The Farm Workforce Modernization Act of 2019 – HR 5038 – was introduced by Representative Zoe Lofgren of California and co-sponsored by Representative Dan Newhouse of Washington.

This bill creates an illusion of a pathway to citizenship for farmworkers. However, the legalization framework is limited, complex, costly, and only applicable to a fraction of undocumented farmworkers. It provides, at best, temporary status indefinitely.

The small proportion of families that would qualify does not justify the exclusion of many more undocumented immigrants within and outside of agriculture, who deserve true immigration reform based on labor and human rights.

The bill does not address family separation, but would further divide families for the purpose of maximizing profit for agricultural employers by permanenty expanding the H-2A program. The provision that applies to dependent children of qualifying workers would only be valid for 10 years following enactment. The H2A visa would continue to tie workers to their sponsoring employer, and the bill would expand eligibility for bringing workers through the visa program beyond the scope of field work to include other labor performed on a farm.

All small farms and farmworkers in rural areas with no support mechanisms would be forced to use E-Verify, which would be mandated for all agricultural employers whether they use H2A or not, subjecting undocumented workers and families to deportation. The only option for temporary security would be qualifying the H2A program, whose documented abuses are not addressed with oversight in the bill.

There is no provision in the bill supporting farmworkers’ right to organize, strike, form a union, or collectively bargain. Familias Unidas por la Justicia issued the following statement in response to the bill:

“We see that big concessions have been made, ones that are against our principles in organizing and human rights. We will not give up the right nor will we accept agreements that give more power to growers. We deserve something better, and we will not bargain our means of living for an exploitative and racist system that will become more permanent. We support the ability and rights of workers to negotiate in their own name. Familias Unidas por la Justicia and our members will continue the struggle for farmworkers in solidarity with all the workers of the world. We, therefore, do not in good conscience support the Farm Workforce Modernization Act of 2019.”

This bill is currently in the House Subcommittee on Immigration and Citizenship. Please call and let them know you OPPOSE HR 5038:

For more information on this bill, please read: The H-2A Farmworker Program’s False “Compromise” and ‘Close to Slavery’ or Legalization? The Farmworkers’ Hard Choice

Further Lowlights of the Bill