The Mass Poor People’s Assembly & Moral March on Washington on June 20, 2020 will not be postponed but will be transformed! We are going digital! 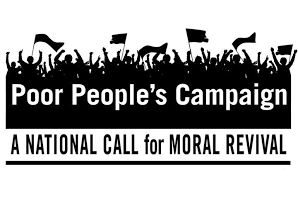 We will hold the largest digital and social media gathering of poor and low-wealth people and people of conscience in this nation’s history. The COVID-19 global pandemic is exposing the already existing crisis of poverty in America, and we are going to bombard every member of Congress and the White House so that we raise up the demands of the Poor People’s Campaign: A National Call for Moral Revival.

We will not be able to gather physically in Washington DC, but it is paramount that we have a forum where poor and low-wealth people can share their truths with a nation that needs its heart broken.

If there was ever a time for a massive outcry, it’s right now. People are hungry for bold, visionary solutions, not just to this current crisis, but to systemic racism, poverty, ecological devastation, the war economy and the distorted moral narrative of religious nationalism. Poor and low-wealth people know the solutions we need.

Stay tuned for more about how we are transforming our vision to adapt to the digital space. We may be isolated, but we remain united!

The Poor People’s Campaign: A National Call For Moral Revival