You are here: Home / About Us / Position Statements

Periodically, events take place that call for a response from the Board of JUUstice Washington.

UU Statement of Commitment in Response to Climate-Forced Displacement

In light of the global challenge of forced displacement caused by the climate crisis, Unitarian Universalist (UU) organizations—the UU Ministry for Earth, UUs for a Just Economic Community, Side With Love, UUA Office at the United Nations, UUs for Social Justice, and the UU Service Committee—join forces to issue the following statement of solidarity and commitment:

Recognizing the interdependence of life on Earth and the accountable pursuit of justice, equity and compassion is central to creating a thriving 21st Century.

Unitarian Universalism is a faith tradition anchored in religious pluralism, the rhythms of nature, and the inherent worth and dignity of each person. The ongoing climate crisis challenges all of our core values as a faith tradition. As organizations currently or historically affiliated with Unitarian Universalism, we feel compelled to speak and act in solidarity with front-line communities facing forced climate displacement. In keeping with these principles of repair and justice, we urge governments, world leaders, corporate actors, and congregations to respond to the global challenge of climate-forced displacement by centering the human rights of affected communities.

As the climate crisis escalates, the needs of those that are suffering the worst effects of climate change—a crisis chiefly caused by carbon emissions from wealthier industrialized nations like the United States—have gained wider acknowledgment. The climate crisis is not a matter for future generations to address; it is already upon us. In early March 2022, the world’s leading climate scientists issued their starkest warning yet about the failure of global leaders to stem carbon emissions. Humanity is on pace to exceed the 1.5 degrees of warming that scientists estimate is the limit the Earth can sustain without risking an unstoppable chain reaction of climate harms.

Due to this collective policy failure, communities around the globe and in the U.S. are already facing the effects of climate destruction. Black, Indigenous, People of Color, front-line, and other oppressed and marginalized communities — who have done the least to contribute to the climate crisis historically—are facing the worst of its effects. Many of these communities have been displaced from their homes, and millions more will follow in the decades ahead. Communities across the U.S.—as well as in other countries—are already experiencing these pressures, and the reality that parts of the U.S. will become uninhabitable is increasingly hard to ignore.

This involuntary climate exile is both a global and a domestic human rights violation on a massive scale. Not only does it deprive millions of people of their rightful home, it also forces them to seek resettlement in a global community that has done little to ensure the safe and dignified reception of people seeking asylum—particularly migrants of color. In the U.S., people are forced to abandon their traditional homes and communities or look to build infrastructure mitigation strategies that outstrip the resource and financing capacity of their households and local governments.

Even as we acknowledge that climate displacement is a present reality and not a hypothetical risk, we also reject the fatalism and defeatism that would deny the possibility of further collective action to forestall or address it. To this end, we shall share the power of our voices and influence with those who have less recourse to engage decision-makers, be they elected, appointed, or corporate actors. We pledge to coordinate our advocacy in order to persuade the international and domestic community to:

Prevent further climate displacement by mitigating the effects of climate change and ensuring a just transition to clean and renewable energy sources;

Ensure—in the event of displacement that cannot be forestalled—that communities are able to relocate safely, with dignity, and in a self-determined way that respects their integrity and identity;

Provide communities with the resources they need to adapt-in-place to the effects of climate change, and to compensate for the loss and damage they have already incurred as a result of anthropogenic warming;

Redress past failures and address root harms and causes as part of our accountable behavior to those suffering harm.

Climate displacement is already occurring around the world. Our leaders have a choice as to the pace at which it unfolds and the treatment of people who endure it. We urge them to act now, before even more people are deprived of their homes.

JUUstice Washington Board Statement on Commitment to Racial Justice

In the long and continuous struggle to bend the arc of history toward justice and compassion and turn away from white supremacy, and racism more generally, JUUstice Washington  reaffirms our commitment to work to:

We encourage all JUUstice Washington members and Unitarian Universalist congregations to move boldly forward to make this time in history a tipping point toward racial justice. 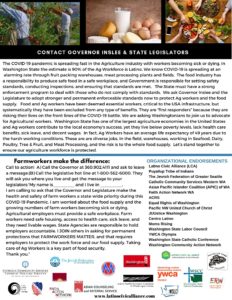 The Board of JUUstice Washington voted unanimously to join Latino Civci Alliance in asking the Governor, Legislature and State Agencies to make farm worker health and safety a priority, especially in light of the COVID-19 Pandemic. Among many other groups, the COVID-19 pandemic has hit the agricultural workers very hard.  The have been deemed “essential workers” and required to continue working in order to keep food supply systems operational.  However, in spite of being essential workers, farmworkers are not receiving the equipment and safety protocols necessary to perform their work without risking exposure to COVID-19 for individuals and entire communities.  JUUstice Washington granted Latino Civic Alliance permission was granted to use our name and logo on a flyer produced by Latino Civic Alliance requesting our greater community to petition Governor Inslee and the WA State Legislature to act.

On or about May 31, 2019 a quorum was achieved by email voting to sign-on to the Our Children’s Trust (OTC) amicus brief described below.  Organizations signing on needed their statements filed with OTC by June 2, 2019.

The JUUstice Washington Board of Directors and the Social and Environmental Justice Committee of the Bellingham Unitarian Fellowship have voted to become signatories on an interfaith amicus brief to be filed on behalf of the youth in Aji P. v. State of WashingtonOur Children’s Trust.

The Statement submitted to OTC by JUUstice Washington for inclusion in the amicus brief Motion to File is as follows:

“JUUstice Washington, a Unitarian Universalist State Action Network is a signatory to this brief because it works diligently with Unitarian Universalist (“UU”) congregations throughout the State of Washington to carry out its principles, one being the Seventh Principle in which we affirm and promote, “Respect for the interdependent web of all existence of which we are a part.” In addition to this Principle, JUUstice Washington also affirms and promotes our Sixth Source of Living Tradition with which we draw upon, “Spiritual teachings of Earth-centered traditions which celebrate the sacred circle of life and instruct us to live in harmony with the rhythms of nature.” JUUstice Washington fully supports and believes in these youth and their challenge to their elders that climate change is within the purview of the public trust and they have the right to secure and preserve their future and those of future generations.”

On March 1, 2019, UU Worldmagazine published an article entitled “After L, G, and B” which hascaused harm to transgender and non-binary people. In the article, a cisgender woman wrote about her perspective and experience while intending to be an ally to transgender people. In its public response, Transgender Religious professional Unitarian Universalists Together (TRUUsT) explains the harm caused by this article:

“The UU World’s article titled “After L, G, and B” frames the trans experience by centering a white, heterosexual, cisgender woman’s experience. By doing so, it reduces trans people to objects—something that happens far too often in society and in our UU communities. The use of harmful slurs, the conflation of intersex and trans experience, and a repeated focus on surgery, hormones, and pronouns perpetuates stereotypes around trans experiences that devalues the gifts we have to bring to the world and Unitarian Universalism.”

JUUstice Washington is committed to dismantling institutional and systemic oppression, including oppression based on gender identity/expression. We encourage you to read the UU Worldarticle and TRUUsT’sresponse, and explore the additional resources listed below. The Unitarian Universalist community is a space in which trans UUs regularly experience oppression. UU World’s commissioning and publication of “After L, G, and B” is reflective of and adds to that collective oppression. We call on our cisgender members to develop new knowledge and skills that are needed to create a safe and inclusive community in which the inherent worth and dignity of all people is truly valued and honored.

What It Takes to De-Center Privilege: The Failure of this Week’s UU World Article (Alex Kapitan)

Report on the Experiences of Trans Unitarian Universalists (TRUUsT)