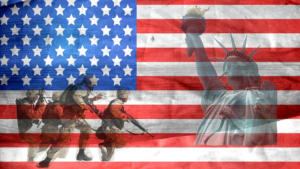 Last June, the Department of Homeland Security repealed “Parole in Place,” a policy that prevented deportation of family members of active duty military members, veterans, and reservists. Previously, federal immigration officials allowed servicemembers and veterans the time to pursue paths to legal residency for both themselves and their family members without fear of disruption and separation.

Removing this protection is cruel and inhumane. And it’s a slap in the face to those who have borne the brunt of our often disastrous foreign policies.

Add your name to tell your Senators to cosponsor S. 2797, The Military Family Parole in Place Act, and keep our servicemember and veteran families together.

Service in the armed forces and reserves has been a path to citizenship for generations. Now, the Trump administration is refusing to hold up their end of the deal. This is unfair and underhanded. At a time when very few of us will ever see a battlefield, we must honor our obligations to those who have.

The problems with our current xenophobic immigration policies are large and require big solutions, and this is one thing we can do right now for people who have made an enormous commitment to our country.

Win Without War, building a movement dedicated to ensuring the United States acts to uplift and reinforce all peoples’ desire for dignity, prosperity, and self-determination.