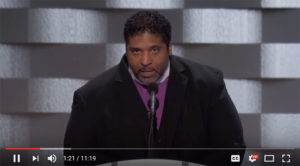 I’m Reverend William J. Barber, II, of Repairers of the Breach, the Poor People’s Campaign, and the Moral Mondays movement. And I am asking you to join me in this call to all the presidential candidates:

All presidential candidates should unite for a massive, pro-voter, anti-racism rally in Greenville, NC—the city in which Trump supporters spread a bigoted, racist and xenophobic chant—to reject racism and regression, register voters, and demonstrate what an America committed to moving forward together looks like.

On July 17, the Trump 2020 campaign held a rally in Greenville, North Carolina, where President Trump used racist tropes to demonize Representative Ilhan Omar before pausing to let the crowd chant, “Send her back!” Along with the vast majority of Americans, all the other presidential candidates condemned Trump’s appeals to racism. We are writing to invite them to come together for a mass rally in Greenville to demonstrate what an alternative for America’s future looks like.

While the candidates are not enemies, we understand they are competitors. They have real policy differences between them, and they are on the campaign trail to make the case for why they should be the next person to lead the United States of America. But just as the global community of nation-states has at times put aside competitive differences in order to face an existential threat, we believe this is a time for candidates to unite and demonstrate what an America committed to moving forward together looks like.

If you agree, please add your name to our letter asking all the candidates to unite against racism and regression and for voter registration—at a massive rally in North Carolina.

It is important to return to the scene of Trump’s crime in North Carolina’s Pitt County, because while the whole world has seen images of a nearly all-white crowd chanting in racist unison there, we know this does not actually represent Pitt County or the vast majority of rural America that Trump 2020 wants to cast as “red counties.” Pitt County is not, in fact, a red county. Hillary Clinton won Pitt County in 2016, as did almost every Democrat down ticket. Pitt County is in North Carolina’s Black Belt. Poor and low-income Black, white, and Latino people there have voted in a fusion coalition that demonstrates our capacity to come together and reject the divide-and-conquer politics of racism.

America desperately needs to see this possibility now. Because such coalitions are possible all across the South and the Midwest. These fusion coalitions offer the only hope of reclaiming democracy from a movement of extremism.

North Carolina’s Forward Together Moral Movement organized in response to extremism that took over the state legislature and the governor’s office in 2013. The policy agenda that the Trump administration and its enablers in Congress are pushing today was front and center in North Carolina in 2013. Leaning into a long history of moral fusion organizing in the South, we learned to fight reactionary extremism by highlighting how racism hurts Black, white, and brown people regardless of their party affiliation. We came together in mass Moral Monday rallies that showed the people of North Carolina what uniting to move forward together could look like. We beat voter suppression in the courts, and we beat extremism at the ballot box in 2016’s statewide races. We know fusion coalition can win in the South … even in places that have been misidentified as “Trump country.”

The vast majority of Americans do not want to capitulate to racist demagoguery. They do not want to be pitted against one another in a zero-sum competition. Most people are desperate for leadership that can chart a path forward together to the multi-ethnic democracy of equal opportunity that this nation has long aspired to become but has never yet been.

Now is the time to unite for a mass unity and voter registration rally focused not on any individual’s campaign, but on the coalition building that is needed to dispel the myth of a solid South and show the nation what a better future looks like.

Please add your name if you agree, and we’ll make sure all the candidates hear our call for unity against racism and regression and for voter registration.

The world is asking how the candidates will respond to the open racism of Trump’s Greenville rally. We believe the answer is, “If Americans don’t like what they see in the White House, they can go door to door registering and educating a powerful new fusion coalition to chart a new course beyond 2020.”

Whoever emerges to lead the challenge to Trump in 2020, this must be clear: The future of democracy and the well-being of our common home on this planet depend upon a fusion coalition that can reclaim American democracy from the extremism that now holds power in our public life. We believe this crisis demands that we unite to make this single message clear.

Click here to add your name to this petition, and then pass it along to your friends.